The carbon dioxide extinguishing system is a fixed system to extinguish fire by the smothering action of CO₂ gas. This is the most effective system for protection of machinery spaces, paint stores, and other related hazard areas.

A low pressure CO₂ system is a central bulk unit that normally serves to protect various hazards spread throughout the facility. It can protect a certain hazard areas up to 150m or possibly evn further from the location of the cylinder storage tank. If possible, however, the unit should be located near the hazard or group of hazard areas.

The low pressure CO₂ storage tank consists of a refrigeration system to maintain the pressure between 18 and 23 bar. Failure of the refrigeration system will cause the pressure to rise slowly and the amount of liquid CO₂ to decrease gradually. An alarm system is available to alert personnel to abnormal pressure levels. If no repairs are made within a reasonable time, the unit will refrigerate itself by bleeding off vapor and thereby reducing pressure causing the amount of liquid CO₂ to fall below the designed quantity/capacity.

A low pressure tank is filled in place by a bulk tanker. Thus, you don’t need to remove the tank from the system, and the hazard areas remain protected even while the tank is being refilled.. 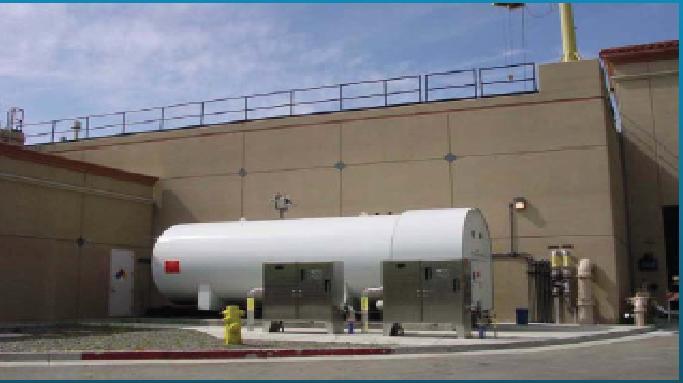 ADVANTAGES of an LPCO₂ System

Carbon dioxide is a colorless, odorless, clean, electrically non-conducting, non-corrosive and non-deteriorating inert gas that is approximately 50% heavier than air. It is normally present in the atmosphere at approximately 0.03% by volume and plays a part in respiration and other vital functions in humans and animals. Extinguishing concentrations of carbon dioxide will not support human life .

Carbon dioxide extinguishes fire by diluting the oxygen content of the space to a point where it will not support combustion. Reducing the concentration of oxygen will extinguish most fires.

Carbon dioxide is inert and most materials and equipment are totally unaffected by exposure to it. It is suitable even at high temperatures and does not decompose when subjected to fire. Therefore, it does not cause metals to corrode.

Carbon dioxide may be utilized for Class A, B and C fires. It is especially useful for extinguishing fires in certain specific hazard areas or equipment.

Carbon dioxide will not extinguish fires involving chemicals containing their own oxygen supply such as nitrates; reactive metals, such as sodium, potassium, titanium, zirconium, uranium, or plutonium; or metal hydrides.

CAUTION is required where carbon dioxide may be discharged into potentially explosive atmospheres. Electrostatic charging of non-grounded conductors may occur during the discharge of liquefied gases. These conductors could discharge to another object and cause an electric spark with energy sufficient to initiate an explosion.

A Total Flooding System consists of a permanently fixed supply of carbon dioxide, piping and nozzles, designed to discharge CO₂ into a permanent enclosure capable of containing the carbon dioxide and establishing and holding an extinguishing concentration for a suitable period of time. As a result, the total flooding system accomplishes a complete and permanent extinguishment of the fire in a specific combustible material. Fires that can be extinguished by a total flooding system can be divided into two categories:

(a) Surface fires involving flammable liquids, gases and solids, and

A Local Application System consists of a permanently fixed supply of carbon dioxide, piping, and nozzles designed to discharge CO₂ directly into the fire for the protection of a specific piece of equipment or surface. A local application system is appropriate for flammable liquids, gases and shallow solids where the hazard is not enclosed or where leakage prohibits the use of a total flooding system.

The hazard must be isolated from other hazards or combustibles to keep the fire from spreading outside the protected area. All areas that may become coated by combustible liquids as a result of spillage, leakage, or splashing are also part of the hazard. So are all associated materials that may extend into or out of the protected areas.

Fires that can be extinguished by a local application system are handled by two distinct design approaches: (a) rate-by-area and (b) rate-by-volume. 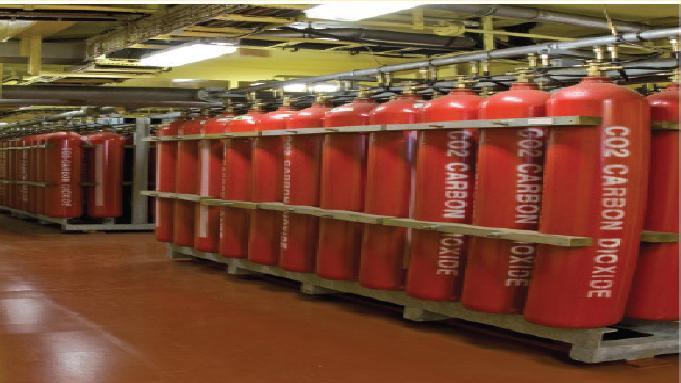